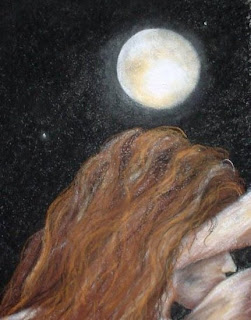 They met on a mountain top in Africa, having both summited long before any of thier companions reached the top. They sat for quite some time together, laughing and talking, sharing a bottle of blue Gatorade and stories about other climbs.
It was hard to explain. There was a spark, but they were both in long-term relationships with other people. Still, there was a connection, and it was strong. When thier companions, including thier respective signifigant others, began to summit, they said goodbye. Niether understood the sadness they felt in parting. After all, they'd only just met, and didn't really know one another at all.
Time passed. The relationships they were in each fell apart for different reasons. He thought often of the girl he met on a mountain top. She thought of him, too. They each knew the state where the other lived, (him in Michigan, she on the West Coast) but they had not exhanged last names. As hopeless as it seemed, they remained on one another's minds. He could still hear her laughter and remember how it had made him smile. Someone asked him once if he believed in soul mates, and he thought of her, and said yes. She loved star-gazing, and would often think of him while walking alone at night. She could still picture his face clearly, and she'd wonder where he was, if he ever thought of her.
When his friends asked him to go climbing in Alaska a year later, he almost said no. He was busy at work and felt he wasn't in proper shape for a trek. But there was something pushing him onward, telling him to take the chance that, crazy as it seemed, maybe, just maybe, what happened once might happen again.
It was the same for her. She didn't even like climbing, not really, but when her friends asked her if she'd like to hike in Alaska, she said yes, imagining how amazing it would be if she was to meet the same man again in the same way.
At first she couldn't believe it. When she reached the mountain top and saw him sitting there holding a bottle of blue Gatorade, she thought she was hallucinating. When he saw her, he dropped the bottle, and niether spoke for quite some time. They both knew, in that moment, they had in front of them everything they had ever been looking for. They didn't know how they knew, only that they did. They exchanged all necessary contact information, and were married a few months later. Their friends thought they were nuts to change thier whole lives just because they'd met twice on the top of mountains, but they knew what they had was amazing, and they also knew they had been blessed with something that the universe rarely offers...a second chance. Oh, there are second and third and even fourth and fifth chances, yes, to find love, happiness and joy, but rarely is one blessed with a second chance to have the exact same thing. They had missed the mark in Africa...but when they met again in Alaska, they grabbed hold and did not let go.
I read the tale of this couple in a newspaper many years ago. The focal point of the story was soul connections, how they are one of life's most amazing experiences, how they are always mutual, and how they rarely manifest themselves in ordinary ways. You're not likely to find one with a co-worker or someone you meet at a local bar, and you're rarely going to find one when you are actively seeking it. Soul connections happen on a deep level that requires being bold, because they won't usually come to us at convienent times or in ways that make logical sense. That's the beauty of it, but also, the very reason many people don't recognize when it's happening in thier own lives.
But the wonderful thing is, they do happen. We just have to keep our eyes open and be bold enough to believe in something beyond the ordinary.
Posted by PanPanStudios at 4:33 AM