The Power of Stating Our Intentions

I have been an avid knitter for almost 10 years now. It's more than a hobby. Might be bit of an obsession....
Still, there's many skills related to knitting that I had not yet attempted to tackle. And there's no real reason why. I had been knitting for a couple of years, making primarily simple scarves, wraps and such before I braved following a pattern. Even then, I didn't go beyond the comfort zone of basic. That took a while, but once I moved past the comfort zone of basic, I moved on to skills using multiple needles at once, following charts, complicated lacework, etc.

The comfort zone of basic. Basic is one of those words that's taken on new meaning in our society. And it's not one I want to define me.

As my skills and confidence in knitting grew, I took on more challenging projects. But despite my love of all things Nordic, I had never yet attempted the intricate colorwork that knitting style is known for.
Colorwork of any kind was something that seemed so intimidating...the grand poohbah of knitting skills. Master level stuff.... 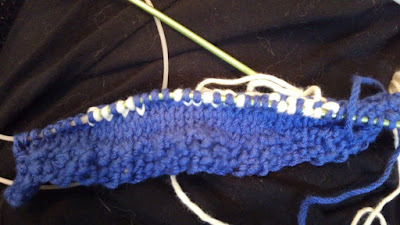 ...until I actually did it! Isn't that the way it goes? Things can seem so overwhelming, so out-of-reach, so impossible...until we just sit down one day and say, okay, I'm going to do this.

The intention in our words matter. 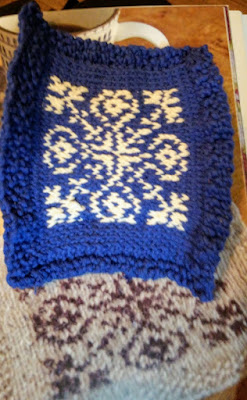 This summer, I was going to learn colorwork. I stated it to others. I put it on my list. I told myself. 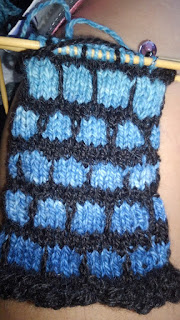 Of course it takes more than stating an intention to accomplish something, but it's a powerful first step. We open a door. We move into accountability. We started planning. We begin visualizing.

Stating our intention in a clear, precise, definite way is one of the boldest things we can do because it  moves us forward, out of fear, into possibility.

**The Snowflake pattern I followed is in the book, Nordic Knts: 29 Stylish Small Projects and can be found here.

***The second colorwork pattern is called Leaded Glass Mitts and is available here.
Posted by PanPanStudios at 6:07 AM